I’m on a train heading to Boston for the Women in Comedy Festival, and I have just discovered I have internet. It’s a mixed blessing. If I had my druthers, I would stare out the window like a dog. But I have emails that need sending and reading, and I have a website I’ve ignored for two years.

The train is currently stopped in New London, and I wish I were sitting across the aisle where there are views of giant ships. I could take a nice photo and post it here. Instead, I’m looking down a street in the direction of downtown New London – this is where I did fifteen minutes for the first time. Yes, this place has history! I had been doing stand-up for about three months in New York, and I was booked along with two other comics to perform at a coffee shop here. We had a long drive in and then went for a walk, where we discovered many chicken bones in the gutters. We then picked up a pizza, but I remember having trouble eating as I realized we would be performing soon. Fifteen whole minutes!

I think it’s cute now that I have clocked in so much stage time, but it was a big step for me that day. In the end, it wasn’t a great show, but I felt great about it. Those chicken bones were comedy gold, so I made sure to open my set making a crack about them – it went over well – and from there my nerves dissipated. I was given one of the posters for the event, which someone had worked hard on, and, on our way out, a man asked us to sign a poster for him, which was ridiculous and flattering. He knew we were nobodies; it was more a gesture of faith in our future. So thank you, New London, for being so good to me. I hope Boston will be just as awesome as you were.

I have walked by the 11th St. flea market countless times.  Somehow used XL sweatshirts hanging on a chain link fence were not sufficient to draw me in.  But this was a warm Saturday, and I was looking for a reason to stay outside.  There is a lot of stuff that’s not worth the money; in fact you ought to be paid just to take it away.  And then there are some great finds.  And then there’s the Godzilla doll I bought, which is awesome… to me.
Gojira 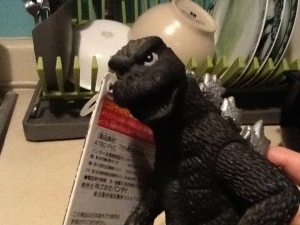 I chose this one, because it has a "puppy face" (the words of the man who sold it to me).

As a child I cried whenever Godzilla was killed in the movies.  What a sad, misunderstood gorilla-whale.  I bought my Godzilla for $18.  Probably not a deal; he’s from Japan, which makes all toys expensive, but he was a bit dusty, which usually makes toys free.  But he wasn’t that dusty.  I chose this one, because it has a “puppy face” (the words of the man who sold it to me).  Very happy with my purchase, and the vendor was super friendly.  Gojira now guards my apartment.

The flea market had weird finds too… 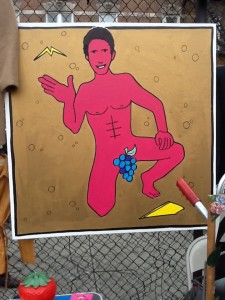 A single grape leaf doesn’t cut it for this happy, naked man.  The man selling this painting told me I was one of many who had asked to take a photo of it.  “For some reason.  There’s just something about it,” he kept saying.  It’s because people are fascinated by things they can’t understand.

I think that’s a paper airplane he’s throwing at you; he’s probably written a love poem on it.  Hang this in your boudoir.

From computers to highchairs – do you really need to shop anywhere else?  These machines are less than ten years old.  Yes, they’re that new!  Fully loaded with Microsoft Paint, solitaire, and a CD drive.  Burn your next 80’s party mix on these babies!

I will christen this site with pictures of my dog, Starbuck.  I bring him up in my set often enough; now people who’ve heard my comedy can put a poochie face to the name.